When you’re a writer, a frequent analogy used for writing a book is that it’s a marathon, not a sprint. It’s pretty obvious why. You have to sit down, day in, day out, for months sometimes, to get all those words written until the novel is finished. It takes endurance to write a novel, and a marathon is an endurance sport. So yeah, it’s an obvious analogy.

Now, like any sane human, I’m not gonna start running marathons just because I write books. Nope, what I decided to do was to start running ultra trails. These are longer distances than regular marathons, through countryside, forests, up and down mountains, they’re pretty intense. I started training in July 2021 and my first official race was 9th October 2021: the 55Km Ultra Trail Beaujolais Vert in the Rhône-Alps region of France. Because sometimes you just have to say, “Fuck it, let’s see what happens.” Quick aside, this is generally a good philosophy to live by, in writing as in life itself.

Anyway, pain. I quite like it. Not the everyday, aargh-stubbed-my-toe kind of pain. That’s just annoying. I’m talking about the pain you get from putting your muscles under intense pressure and the lactic acid comes flooding in and it buuuuuuurns. Yeah. I like that. Which is fortunate, because as it turns out, when you’ve just passed 40 kilometres and you’re out in the middle of nowhere and there’s no choice but to carry on otherwise you’ll never get home, pain is your constant friend.

Anyway, let’s quickly back up, because no one simply wakes up one day and says, “Ooooh, I’m gonna start running super long distances.” That would be weird. Also maybe dangerous? So here’s what happened.

I live in a really hilly, forested part of France not far from the Alps, and for years I’ve been hiking and cycling up and down the hills and through the trees. Then COVID happened, lockdown happened, and like a lot of other people, my health and fitness took a battering because: ate way too much. When lockdown ended, I started doing outdoor fitness sessions, because I love being out in it. First once a week, then twice a week, then three times a week. It became a bit of an obsession. Then travel restrictions were lifted, and I met up with an old friend from England, who just so happens to be a triathlete and trainer of triathletes. His name is James Bale. One hiking day out, he casually mentions, “You could probably do ultras.”

That was in July 2021. I’d never heard of ultras before then, but it turns out there’s loads around where I live, including a really famous one in the Mont Blanc — the UTMB (Ultra Trail Mont Blanc). I can see the Mont Blanc from my living room window. Who knew people ran up and down it for fun? I decided I wanted to have a go. But first, I’d have to do a couple of shorter ones, just to make sure I didn’t die while putting my body under extreme pressure. Also because you can’t just sign up for the UTMB, you have to have some official races under your belt first. So I signed up for the 55 km Ultra Trail Beaujolais Vert (UTBV). Because fuck it, let’s see what happens.

Race Day was Saturday, 9th October 2021 at 7.30am. That’s a ridiculously early start to the day. Mostly because we were up at 4am just so we could eat breakfast. Quick aside: eating a giant bowl of porridge at 4am is tough. Then we had to make sure our packs were stuffed with all the requisite necessities: energy bars, gels, drinks, survival blanket, more food, a whistle, tissues and hand sanitiser (don’t even), a sandwich, even more food. It’s a lot to carry up and down various giant hills. But necessary, to stave off death, so I was all over it. Once the packing was done, it was time for a warm up, then we jumped in the car and drove to the Lac de Sapins in the town of Cublize, a short fifteen-minute drive from where we were staying.

I used to go to a lot of music festivals when I was in my 20s, and the atmosphere at the starting line was kind of like that: loud music pumping, hundreds of people milling around all buzzing, except it was off adrenaline not illegal drugs, and there were no randos lying around in a puddle of their own vomit. And then we were off!

There’s something a bit special about running through endless, misty pine forests as the sun comes up. And when you come out in a clearing at the top of a hill and see the spectacular vistas around you, it really takes your mind off what you’re putting your body through. The first 30 kilometres went really easily. May or may not have had something to do with the excellent aid stations that the UTBV provided (which included so much coffee! Also clean toilets. I didn’t have to pee in the woods once, whoo-hoo!), and my running partner and I quickly became known as “les anglais” because we were the only British people running in the competition. The volunteers were super friendly and encouraging, and that coupled with all the massive amounts of food and coffee they provided, helped immensely with the lagging energy levels throughout the day. 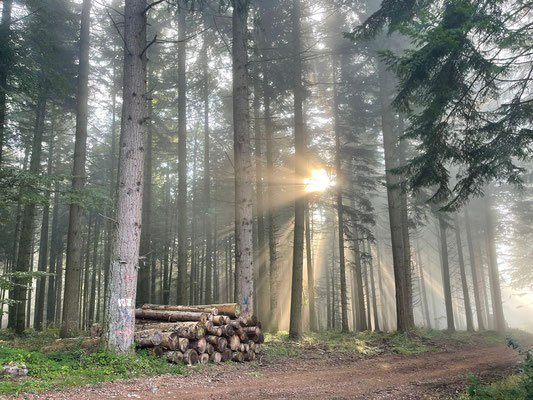 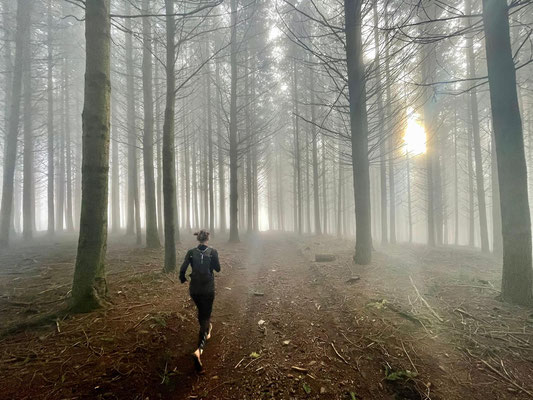 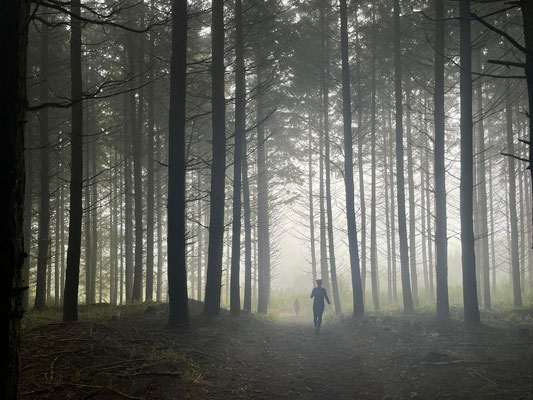 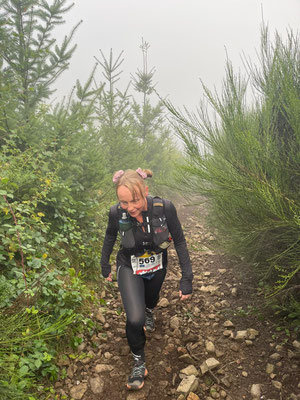 Before Race Day, the furthest I’d ever run was 42 kilometres. On Race Day, by the 45th kilometre, I had to have a bit of a word with myself. My feet felt like someone had battered them with a cricket bat, and running down those steep descents was a mind-fuck of agony. Funnily enough, in the days leading up to the race I thought I’d have trouble with my breathing from running all that distance, or that maybe my legs would tell me to fuck off during the 2,400 metre ascent, but nope. Lungs were happy, legs were fine. It was my feet. Hadn’t considered my poor, beleaguered feet… They fully hated me and were intent on making me suffer for what I was putting them through.

The 50th kilometre got us to the top of Grand Mont, the final ascent of the race, and it felt like a moment. Plus, the final 5km was all downhill. As we ground each kilometre under our feet, we passed encouraging signs that told us how far we had left to go and kept us motivated. But in that last stretch, I really had to make use of all my years of yoga and mediation, and send my mind off out of my body so that I couldn’t feel the pain any more and just keep running. Thank fuck I was able to do that. I’d still be a blubbering heap in the deepest darkest depths of the Beaujolais if I couldn’t.

What’s really awesome though, as you’re running towards the finish line, is seeing your friends there cheering you on. It does wonders for your morale, because you know that, even though they think you’re fucking mental, they’ll support you anyway. Awww, thanks guys! Even more awesome though — actually running across the finish line! It’s over. It’s done. You’re Frodo on the slopes of Mount Doom. You’ve just run your first ever ultra! 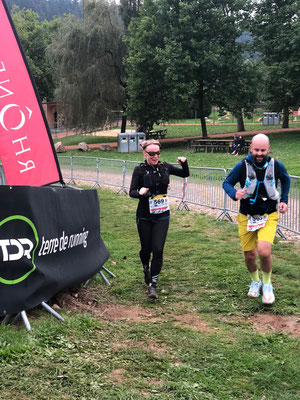 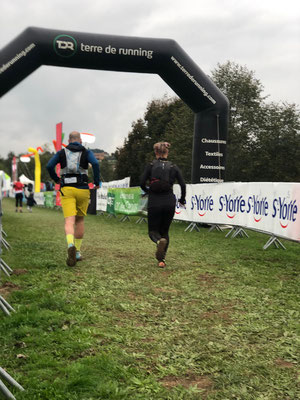 The rest of the evening was a blur of Champagne, high-fat foods and a hot tub. Because that’s the reward for saying fuck it, let’s see what happens.

This time next year, I’ll be running the 110km UTBV…